SEOUL, July 31, 2013 — Sounds from the world famous Vienna Boys’ Choir will come preloaded on LG Electronics’ (LG) all new flagship LG G2 smartphone. LG worked closely with the choir to create a series of unique harmonic sounds including nine ringtones and five notifications and alarms. Also, four musical chimes such as Bach’s Air on the G String are included.

“Whether it’s classical compositions or fresh a cappella music, LG has always viewed beautiful music as a great complement to our beautiful devices,” said Dr. Jong-seok Park, president and CEO of LG Electronics Mobile Communications Company. “As the pinnacle of international choirs and the most famous, it’s fitting that the heavenly music of the Vienna Boys’ Choir is featured on LG G2.”

The Vienna Boys’ Choir is one of the oldest and most famous boys’ choirs in the world. For nearly 500 years it has been an enduring symbol of Austria and currently performs in about 300 concerts a year before half a million music lovers all over the globe. The boys are selected mainly from Austria but also hail from many other countries.

LG’s efforts to create synergy between technology and human sensibility extends back to 2006 when LG worked with the Swedish a cappella group, The Real Group, to mimic cell phone sounds using human voices. In 2010, LG included the actual orchestra sounds of Ennio Morricone to its smartphone lineup.

Starting on August 1, fans of great music can log on to the LG G2 microsite (www.G2.LGMobile.com) and download the Life’s Good ringtone sung by the Vienna Boys’ Choir as well as other free music. 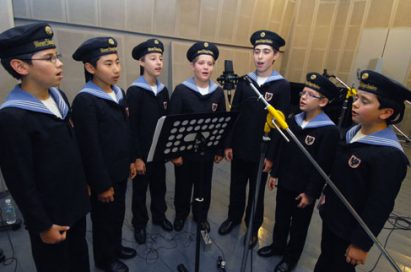