As the Only Company Offering 3D on Everything From Smartphones to TVs,

BERLIN, Sep. 01, 2011 –- Under the theme, “DO IT ALL IN 3D”, LG Electronics (LG) will showcase the outer limits of 3D technology at IFA 2011 through its lineup of CINEMA 3D Smart Total Solutions which includes TVs, monitors, projectors, notebooks, home theater systems and most recently, a smartphone.

Over the past year, LG has knocked down a number of barriers facing popular adoption of 3D devices and contents. Foremost among them has been the quality of 3D display which has been markedly improved. In turn, LG’s CINEMA 3D TVs are “Flicker-Free” certified by European quality assurance agencies TÜV and Intertek, while 3D monitors have been enhanced for wide-angle viewing and bezel size reduced to give consumers maximum viewing space. Equally important, LG continues to offer the lightweight and battery-free 3D glasses which can be used with every 3D products from LG.
Providing the perfect audio for LG’s 3D range, an all-new CINEMA 3D Sound HTS whose 9.1 speaker system creates the closest thing to the audio power of movie theaters or live concerts. Upright 3D Speakers further enrich the audio by pumping sound upward, while a 360-degree reflector inside each of the speakers reflects sound in all directions.
The DO IT ALL IN 3D showcase also features a glasses-free 3D mobile device — the Optimus 3D smartphone. The Optimus 3D enables users to view, create, edit and share 3D content whenever and wherever they may be. The Optimus 3D is equipped with LG’s proprietary 3D Game Converter, allowing users to convert their existing 2D games into 3D for an optimal gaming environment.
All of LG’s 3D products will be featured in three sections in the DO IT ALL IN 3D showcase. In the “Create in 3D” section, visitors will be able to record their own 3D video with the LG Optimus 3D smartphone then upload it onto YouTube’s dedicated 3D channel. The “Share and Save in 3D” section will have on display an array of exclusive 3D content and highlighting how easy it is to share 3D content with other devices via HDMI and DLNA (Digital Living Network Alliance). Lastly, the “Enjoy in 3D” section will treat visitors to the thrills of 3D gaming on various LG 3D products, with immersive 3D games developed in collaboration with the leading mobile games company, Gameloft.
LG’s participation in IFA 2011 underscores the company’s efforts to distance itself from its competitors as the 3D industry’s undisputed leader. LG intends to continue its aggressive push further into the 3D environment with more advanced R&D and valueadding strategic partnerships.
Visitors to LG’s booth at IFA 2011 will have ample opportunities to personally experience the products that make up LG’s 3D Ecosystem. LG’s DO IT ALL IN 3D showcase is located in Hall 11.2 of Messe Berlin from September 2 to 7.
# # # 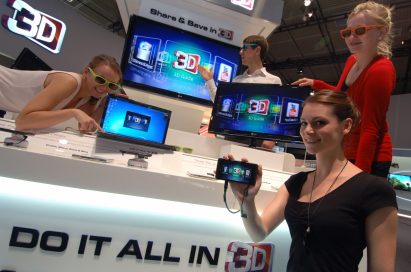