SEOUL, May 11 — LG Electronics (LG) today announced an agreement with Fox Digital Entertainment and Rovio Mobile to pre-load Angry Birds Rio on LG’s Optimus Series smartphones, an unprecedented commitment to make entertainment content available to LG customers when they purchase a phone. Angry Birds Rio -– an extension of Rovio’s wildly popular original Angry Birds game -– was developed in conjunction with Twentieth Century Fox and features the original Angry Birds characters alongside the animated stars of the studio’s recently-released motion picture, RIO. The film -– from the makers of the hit ICE AGE series -– is in theatres now around the world.
“We’re excited to bring one of the most successful mobile games to our customers,” said Yong-seok Jang, Vice President of Business Strategy at LG Electronics’ Mobile Communications Company. “Angry Birds Rio will help showcase the power, smoothness and speed of LG’s Optimus series of Android smartphones to our customers.”
“We’re thrilled to expose the millions of LG customers across the world to the fun and exciting world of Angry Birds Rio,” said Mikael Hed, CEO of Rovio. “With more than 20 million downloads to date, Angry Birds Rio’s launch has been our most successful ever, and by pre-loading the game on high-performance LG Android smartphones worldwide, we look forward to even more success in the future.”
“In partnering with a company with the global presence of LG, we’re once again expanding the reach of the successful Angry Birds Rio game, while also continuing to drive awareness of RIO: THE MOVIE, a film that has already proven to be incredibly popular with audiences worldwide,” said Peter Levinsohn, President of New Media and Digital Distribution for Twentieth Century Fox.
In Angry Birds Rio, the original Angry Birds are kidnapped and taken to the magical city of Rio, where they eventually escape their captors and set out to save their friends, Blu and Jewel – two rare macaws and the stars of the popular Fox motion picture, RIO. Like the incredibly-popular original Angry Birds, Angry Birds Rio will feature hours of gameplay, physics-based demolition challenges and loads of replay value – all with unique twists based on the popular film. The game, which launched with 60 dedicated levels and will add new levels regularly via updates, is currently available for download on smart phones and tablets worldwide.
The first phone to embed Angry Birds RIO will be the Canadian version of LG Optimus 2X, the world’s first dual-core Android smartphone. Thanks to its advanced graphics and high-end features such as the content mirroring through HDMI interface, users can get all the advantages of seamless multitasking between applications, instantaneous touch response along with vivid graphics and a console-like gaming experience.
Angry Birds Rio will be available on LG’s Optimus Series smartphones starting in the second quarter of 2011.
# # # 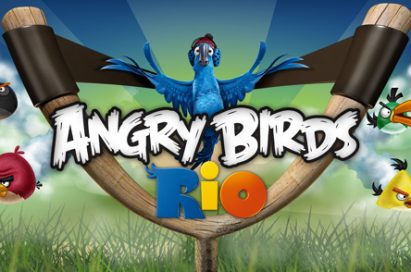