SEOUL, Dec. 22, 2010 –- LG Electronics (LG) today announced the release of an exclusive collection of music and ringtones written by movie soundtrack maestro Ennio Morricone. The first such collaboration of its kinds, both newly composed pieces as well as a selection from Morricone’s legendary oeuvre, including Cinema Paradiso, The Mission and Love Affair, will be included in the collection.
To ensure that the beautiful music is paired with a suitably impressive platform, LG engineers have been hard at work perfecting the audio performance on its latest phones. The exclusive music will be preloaded on LG smartphones starting with the LG Optimus 2X set to debut next month in Europe. LG smartphone users will be able to enjoy a total of 25 of Morricone’s creations — 15 ringtones composed specifically for LG and 10 of his best-known tunes from the world of cinema.
Born in Italy, Morricone is one of the most prolific and influential film composers in the world. He has composed and arranged scores for more than 500 films and TV programs over his illustrious career.
“Signore Morricone is one of the best-loved soundtrack composers of all time,” said Dr.Jong-seok Park, President and CEO of LG Electronics Mobile Communications Company. “Reproducing his work with such amazing clarity on the Optimus 2X, gives smartphones a whole new level of respect as the primary device for on-the-go music.”
In addition to the collection of 25 ringtones and music, LG plans to develop a range of apps with Morricone-related content such as images and video clips for free downloading from the LG Application Store (www.lgapplication.com) starting next year.
The partnership with Ennio Morricone is part of LG’s Mobile Signature Sound Series, which kicked-off in 2006 with The Real Group, the award-winning a cappella group from Sweden.
# # # 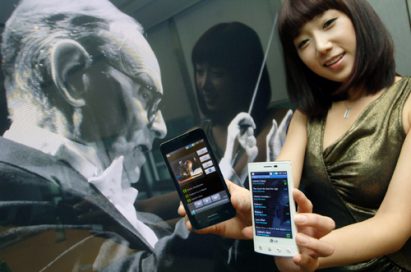